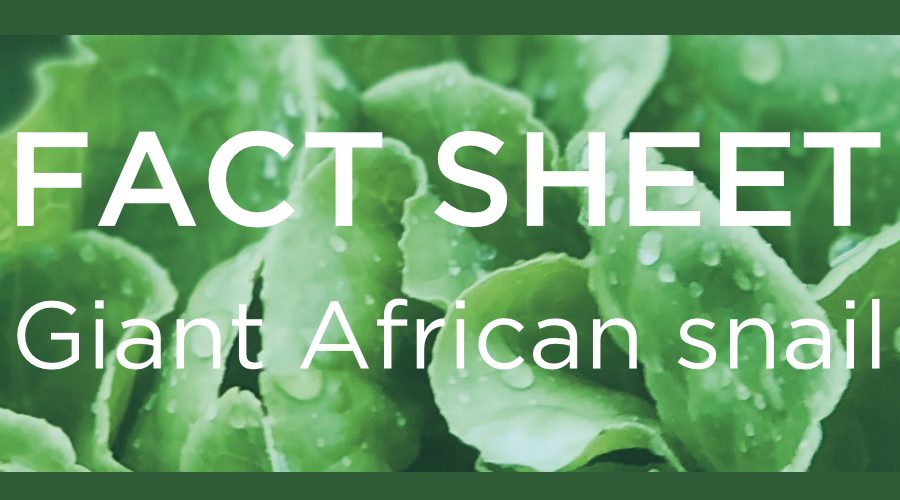 The giant African snail is one of Australia’s most unwanted exotic pests. It affects over 500 plants including a variety of fruits and vegetables.

If the snail establishes itself in Australia, it will threaten the environment, human health, the economy and our horticulture industries. It is larger than other land snails and a general nuisance.

Help protect your garden, your home, the environment and our industries by keeping an eye out for the giant African snail!

The giant African snail reproduces quickly. Studies have shown that these snails can lay up to 4000 eggs per year.

Where is it found?

Originating in eastern Africa, the pest has now spread to Asia, the Pacific, the Americas, and Europe. The snail thrives in tropical to subtropical environments but can also survive cooler temperatures.

How could it get here?

Giant African snails sneak into new places via cargo, containers, and machinery, or by being intentionally smuggled for a number of purposes, including medicine and being kept as pets.

This snail will eat stem, leaf, fruit, and flowers, or destroy the entire plant.

FUN FACT: The pest can carry a harmful bacteria called rat lungworm. This can raise human health concerns and so the snail should not be touched ith bare hands or consumed.

If you suspect giant African snail in your garden, report it to the Exotic Plant Pest Hotline on 1800 084 881.

For more information on the Urban Biosecurity Program, contact Zali Mahony at AUSVEG on 03 9882 0277.