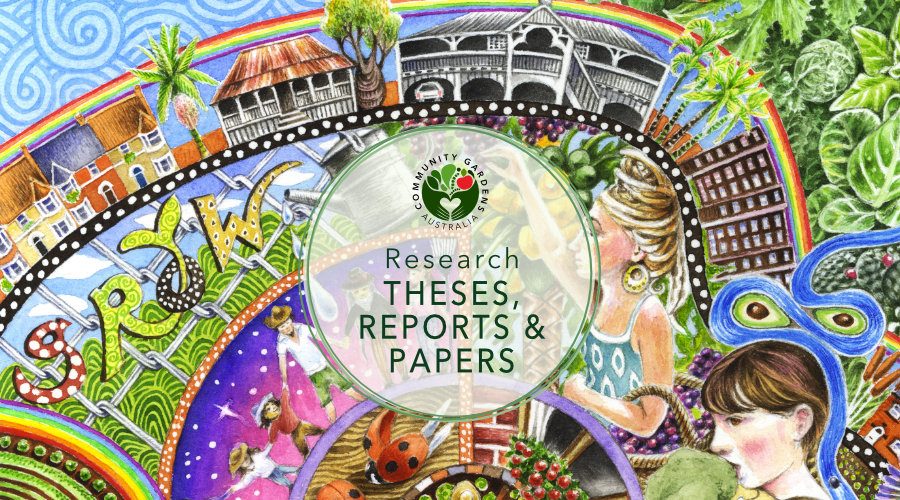 A thesis submitted for the degree of Doctor of Philosophy, School of Environment and Science, Griffith University, Queensland.

Urban Food Gardeners in the City of Brisbane
by Sari Joanne Mangru, 2015

A thesis submitted for the degree of Master of Philosophy, School of Social Science, University of Queensland.

A reflexive discourse of the local place: urban food gardeners in the City of Brisbane, Australia.

Growing Food in the City
by Peter Lyle, June 2015

A thesis submitted for the degree of Doctor of Philosophy, School of Design, Queensland University of Technology.

A study of innovative models of urban agriculture
by Dr Nicholas Rose, 2013

A Winston Churchill Memorial Trust of Australia report on the study of innovative models of urban agriculture in US, Midwest, Toronto and Argentina.

A thesis submitted for the degree of Doctor of Philosophy, School of History and Politics, University of Adelaide.

The role of community gardens in urban agriculture
by David Pearson & Kai Hodgkin, 2010

Paper presented at the Community Gardens Conference: Promotiong sustainability, health and inclusion in the city, at the University of Canberra 7-8 October 2010.

An undergraduate thesis as part of a Bachelor of Planning, University of NSW.

To identify how sustainable urban agriculture can benefit the quality of life of Australian urban communities
by David Mason, 2006

This report details interdisciplinary research funded by the Faculty of the Built Environment at the University of NSW examining the Community gardens on Sydney’s Waterloo Public Housing Estate. The central aim of the research was to understand the role of community gardens inn fostering community development and neighbourhood improvement in a public housing context.

A thesis is submitted in partial fulfillment of the requirements for the Degree of Master of Social Planning and Development in the Department of Sociology and Anthropology at the University of Queensland.

This thesis explores the links between consump[tion and sociality within the temporal and spatial context of Northey Street City Farm, a Brisbane community garden.

Sustainability as seen from a Vegetable Garden
by Louise A. Crabtree, thesis for Bachelor of Science with Honours, Macquarie University, NSW, November 1999.

Paper presented at the International Permaculture Convergence, 1996. Outlines some of WA gardens.

This thesis examines seven community gardens in the south-eastern United States to determine if there are certain physical and aesthetic aspects or community garden that help create a sense of community. After a description of the seven gardens, common themes found within the gardens are identified. Theses themes are used for the creation of a series of design vignettes or ‘patterns’, that reflect the vernacular design tradition in south-eastern community gardens.

Making the Most of Agriculture — City Farms and Park
by John S. Bacon, September 1986

A report following a study tour of New Zealand, England and the Netherlands in May and June, 1986 paid for by the Winston Churchill Memorial Trust.