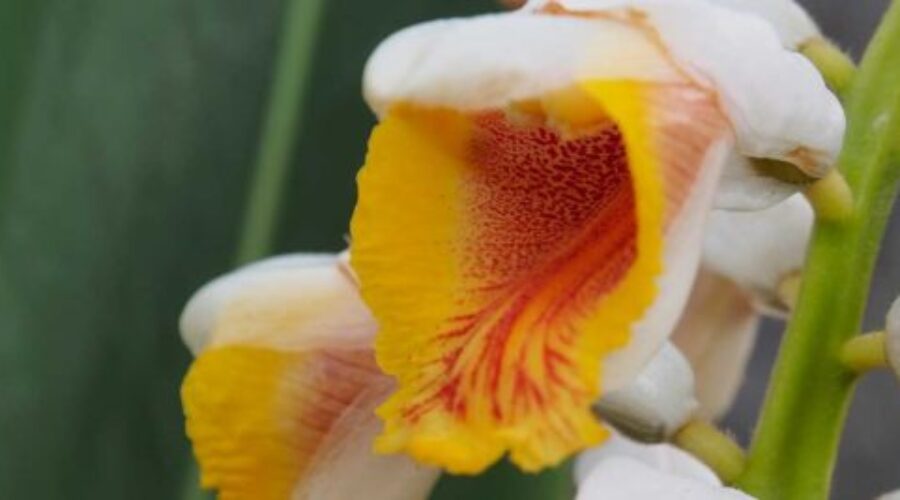 The uses of cardamom

I had never seen a cardamom flower before, but there it was — a cluster of bright white blossoms with yellow/red centres at the tip of a spike emerging above the wide, dark green, pointed, strap-like leaves.
This, I was told, was not the cardamom cultivated as a spice. That is a tropical variety whose seeds are processed into the spice familiar to cooks. It is the leaves of this variety that are the useable part, finding application as a food wrapping and flavouring.

The plant had been established in the garden as a small seedling but over the years it has grown and spread to around a square meter in area by around a metre in height. It is a thick cluster of tough leaves atop strong leaf bases emerging thickly from the root mass.

As I started to cut the plant back to make way for Jerusalum artichokes I realised that it would take a lot of work to do more than trim the leaf area. Part of the root mass would need removing to reduce its area, and that would only grown back again. Complete removal and replanting in an out of the way location might be the solution.

While cutting back the leaves I realised that this member of the ginger family would be one fine barrier plant if established in a close-packed row as a type of living fence.

I recalled gardeners at the Randwick Community Organic Garden at its original location, back when it was established in the mid-1990s, planting a double row of comfrey around their big mandala garden (a mandala garden is a type of circular garden popular at the time). That was to block the aggressive kikuyu grass that would invade the vegetable garden. Even though it was thickly planted as a double row, the kikuyu was persistent and sneaky enough to find gaps through which it would attempt to get into the richer, composted soils of the garden beds.

The experience was a lesson in the necessity for well-made, solid and wide edges to vegetable gardens bordering grassy areas. That was something this cardamom, with its thick growth form and stiff leaves, should be well-suited to. Thinking more as I laboured machete in hand to cut back this tough, bushy plant entity, I realised that a living fence of cardamom would itself occupy a fair area of land and that a narrower though well-made barrier might be the way to go in smaller community gardens.

The other potential of cardamom as a living barrier or fence could be to enclose a chook run in which the birds were free to forage and dust-bath but that defined their area. It would be in addition to the chook house with its fenced, fox-proofed run.

Cardamom is a tropical plant whose centre of diversity, the region of its natural occurrence, is India. This one I attacked with machete was growing quite vigorously in warm-temperate Sydney.

Unless the community garden is inhabited by people with an ethnobotanical interest (ethnobotany, sometimes called ‘economic botany’, is the study of how human cultures make use of plants) who grow specimen plants, and unless it is a large garden where the plant can be used as a barrier or living fence, the limited usefulness of cardamom makes it of questionable value.

That cardamom in the garden might now be reduced in area, however I’m not looking forward to the work of digging up the root mass and replanting the thing somewhere in the garden’s back-blocks.