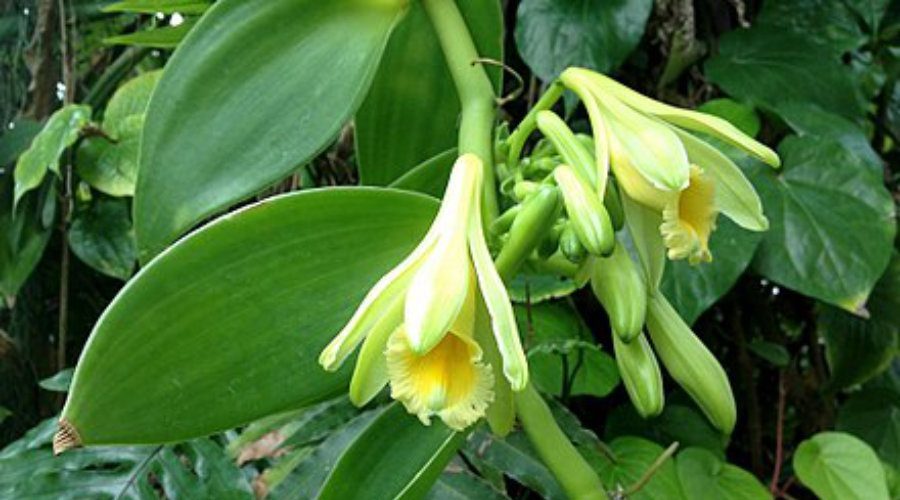 Vanilla is an orchid that climbs like a vine and can reach up to 35m in length. It has long thin stems that zig zag with alternating dark green, leathery leaves, and aerial roots protruding from each node. When the plant matures at a minimum of 3m long and around 3-5 years of age it will produce greenish flowers about 5cm across which need to be hand-pollinated. In the wild, less than 1% of flowers are usually pollinated. The fruit, which is commonly and incorrectly named a bean, is between 15-25cm long and takes up to 9 months to mature.

The most common use for vanilla is as a flavouring for food. It is also used in perfumes and is said to have aphrodisiac properties as well as being used traditionally to relieve fevers and gastric problems.

Vanilla has been proven to have antimicrobial and antioxidant properties.

It is a high-earning crop – the second most valuable spice crop in the world – so can be a good earner in a permaculture setting.

Native to the hot, wet tropics, vanilla struggles to grow more than 20 degrees north or south of the equator. It likes a bright, filtered shade position with a strong support to climb up such as a coconut palm. It will not tolerate direct sun or strong winds and needs relatively high humidity and regular watering. Misting sprayers from irrigation is preferred.

Easily propagated from cuttings with a minimum of 3 sets of leaves. Place the cutting on sphagnum moss or similar and keep damp in a humid spot until new growth occurs. The cutting can then be planted out in a standard orchid mix of 3 parts bark, 1 part charcoal, and 1 part organic compost.

Vanilla can be purchased locally in Darwin from Tropiculture and occasionally at other nurseries.