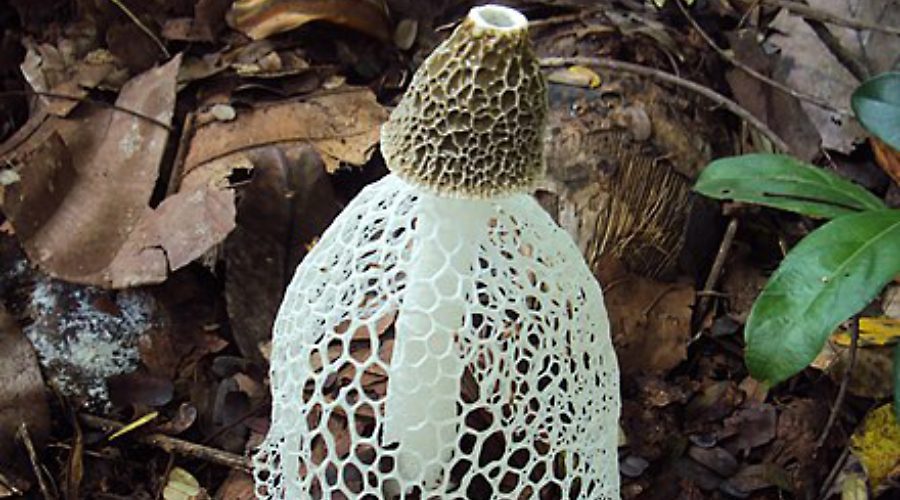 A very unusual-looking fungus, the veiled stinkhorn grows up to 25cm high with a slimy, conical-shaped cap approx. 50mm x 40mm, which varies in colour from white to brown to rusty orange. It has a hollow white stalk and a fine, lacy white net that falls from the cap like a skirt to about ¾ the length of the stem. It has a strong, rotting meat-like smell to attract flies and other insects to its slimy spoors on the cap which is why it is called a stinkhorn.

This edible fungus is sought after in Chinese cuisine and is hailed for its anti-inflammatory and aphrodisiac properties. Typically it is dried and then rehydrated for consumption.

It is known to be able to detoxify environmental pollutants found in rainforests.

Native to Australia and other tropical regions of the world, the veiled lady is commonly found growing in rich organic matter such as decaying logs and leaves or mulch after heavy rains. It is often found in well mulched gardens during the wet season and in particular can be found around bamboo.

It is currently cultivated commercially in China but very difficult to find adequate translations about it.

There is nowhere in Australia that I can find to purchase spores.

The best option I can see is to take specimens as they can be found in the wet season and move to an appropriately mulched area in the hope that some of the spores will take.