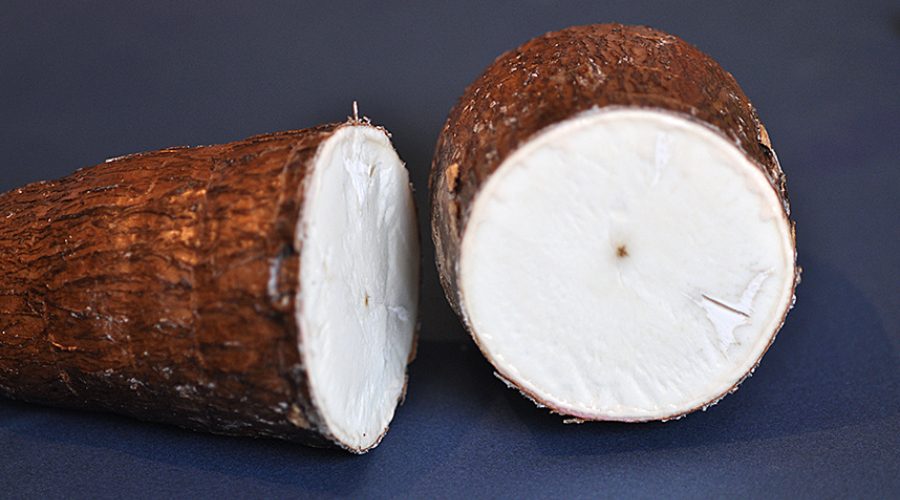 A perennial plant that grows to 2m it is best grown as an annual for its crop of long and tapered starchy roots. It is a tall spindly bush if not pruned regularly with a canopy of tapered leaves protruding like fingers off each leaf stem. The tubers have a thick (1mm) rind and grow to about 30cm long with a white to yellow crisp flesh that are ready to harvest within 9-12 months of planting.

The tubers are high in starch (carbohydrate), phosphorous and vitamin C and the leaves are high in protein. Both need careful preparation as they are toxic when raw. See additional notes.

Alcoholic beverages can be produced from the tubers.

It is currently being studied for its potential to produce a quality biofuel.

The leaves are an excellent mulch and help deter some of the pests attracted to the plant.

Can be used as a laundry starch.

Cuttings of about 30cm in length are taken from plants that have already borne tubers, usually when harvesting the last crop. These cuttings can be planted directly in the ground laid flat in a trench or upright with about 2/3 of the cutting buried.

Cuttings can be purchased at most of the local Darwin markets.

Turkey bush can be found in most local Darwin nurseries in the native plant section. The Greening Australia nursery sells them from tiny seedlings in tubes for a few dollars up to larger and more well-established specimens.

Turkey bush can also be propagated from cuttings quite easily (there are plenty on the roadsides to acquire pieces from) but are very difficult to grow from seed.

Cassava is the third largest source of carbohydrates in the tropical regions of the world after rice and maize.

It cannot be eaten raw and must be prepared properly as it contains cyanide. There are various methods of preparation including soaking, cooking and fermenting used throughout the world. The leaves can be boiled or steamed like spinach and added directly to stews and curries and there are many recipes available for the correct preparation of the tuber.