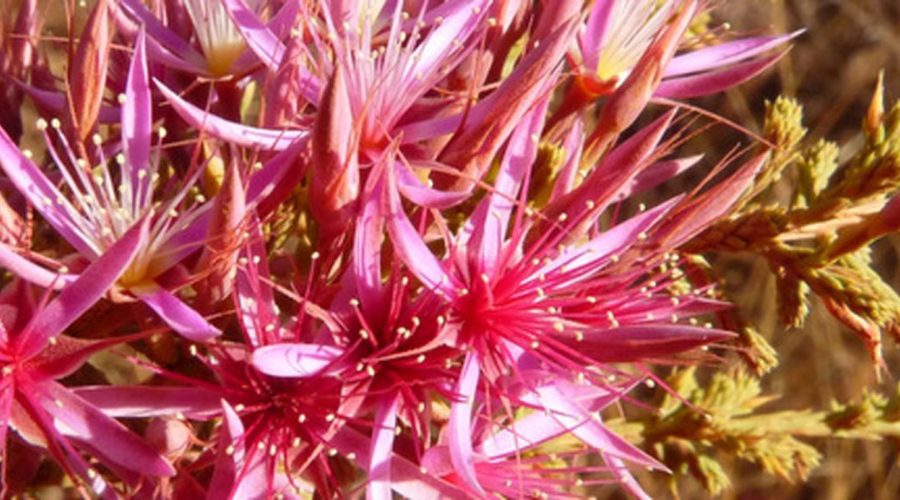 A small to a medium-sized shrub that rarely exceeds 2m in height but can reach up to 4.5m. It has pine-like leaves and star-shaped flowers 20mm in diameter with fine “awns” or hairs that extend out from the calyx lobes beyond the petals. Flowers are mauve-pink that fade as they age and they can also be white.

Typically flowers from May-August in a profusion of pink that stands out from the surrounding green of the bush.

Attracts beneficial wildlife, insects, and butterflies. It provides shelter and refuge for small reptiles, mammals, and birds and is favoured by wallabies as a shade plant. Makes a very good, attractive low windbreak or screening plant. Suitable for rockeries.

Indigenous people use the plant for pain relief and for treating wounds. The crushed leaves are also used as an insect repellent.

Turkey bush prefers well-drained soils of sand and clay and tolerates poor soils very well. It likes full sun to semi-shade and has a low water requirement – grown naturally, in the dry season it receives no water for up to 6 months and survives very well.

Commonly found in open woodlands and on the margins of grasslands it will often not survive hot bushfires.

Turkey bush can be found in most local Darwin nurseries in the native plant section. The Greening Australia nursery sells them from tiny seedlings in tubes for a few dollars up to larger and more well-established specimens.

Turkey bush can also be propagated from cuttings quite easily (there are plenty on the roadsides to acquire pieces from) but are very difficult to grow from seed.

Turkey bush was named after the Plains Turkey or Australian Bustard that used to seek shelter in the bush from hunters when being pursued.

Indigenous peoples used the hard timber of the bush to create prongs for their spears, clap sticks, woomeras and it was also used as firewood.