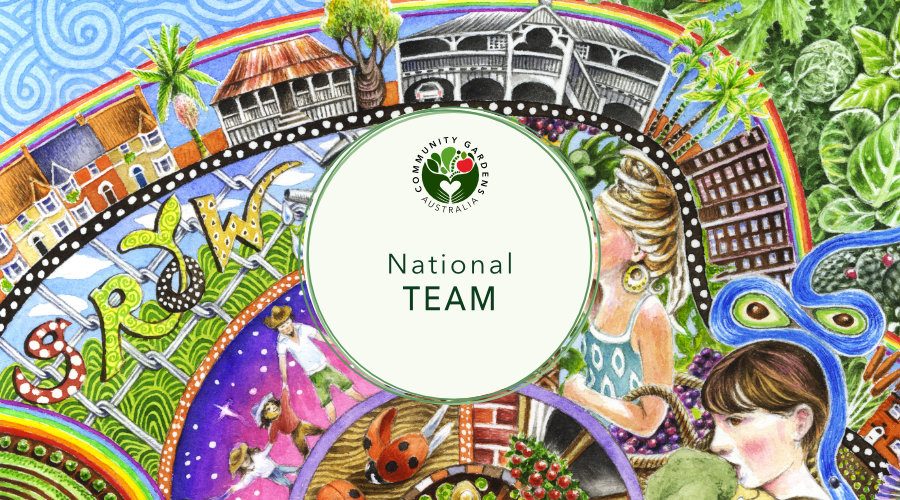 John has experimented with methods of producing food from urban waste for over a decade, and in 2013 incorporated the urban food project Sustainable Urban Nutrition (SUN) : SUN

Naomi is a permaculturalist who is passionate about promoting healthy food systems, sustainable lifestyles and cultivating community. She helped to establish the first community garden in the satellite city of Palmerston in Darwin and is currently the chairperson for the garden.

Naomi believes that community gardens are a wonderful way of promoting her passions and that they are the ideal place for people to come together and share in so many ways.

He is an active member of the Mullumbimy Community Gardens and current president of its association Mullum Sustainability Education and Enterprise Development Inc.

Jane Mowbray has been a community gardener at Glovers Garden and a seed saver for about 15 years.

She is a member of the Inner West Seed Savers and helps to maintain their seed library at the Bower In Marrickville. Jane has been on the executive of ACFCGN since our Melbourne conference in 2007.

John chews on a mash-up mantra: “i am what i eat | i am the change i want to see”. Ruminations continue. His business interests are expressed through BoaB interactive, based in MT Molloy, Far North Queensland.

He was befriended by Jude and Michel Fanton in 1997 and became enchanted with Australia’s blossoming community food systems. Determined to contribute, he founded Australian Community Foods in 1998 and met Russ and Fiona along the way.

In 2002 he earned a Masters in Social Ecology for his research into local food systems and an entropy-grounded theory of ethics, and became more involved with ACFCGN in 2007.

Currently John and wife Caroline are opening up the heavy shale/clay soils and fascinating district of Mount Molloy with an eye toward patterning a tropical pharmacy community garden.

INSPIRED by the idea that we can make our cities places of opportunity, my interests are in developing a resilient urbanism to which end I work with communities on initiatives that make our neighbourhoods safe, sustainable and convivial places to live. My focus has been on community food systems and the social capital that develops when communities collaborate in creating them, but it extends beyond this. My approach is guided by the philosophy of: work with those who want to learn; work where it counts. I:

Currently — thanks to a background in journalism — I am media liaison for the Australian City Farms & Community Gardens Network.

Damian is new to the community garden scene, but is passionate about education and community. Hence the drive to establish his communities first garden. Seeing the need to have a place that can be used as an education tool for local school children, inclusive space for the growing multi-cultural population and designed to aid the elderly, it is exciting times for the local area.

Christy’s story began in the Aboriginal community of Ernabella, South Australia.  She is comfortable in creek beds, where she went on to organise camps as a young person and then after studying communications at the University of SA developed as a project manager of the Schoolies Festival SA and non-profit organisation Encounter Youth.

Having three children sparked her interest in homemaking and sustainable neighbourhoods which led her to study permaculture at the Food Forest, dig in The Goody Patch community garden and research Edible Churches.

In short she loves conversations and action that come out of creek beds, camps, parties, homes and neighbourhoods. She is currently an Urban Sustainability Officer with Natural Resources Adelaide & Mt Lofty Ranges.

Growing a garden relies on a healthy soil to sustain growth. Jo has worked maintaining healthy soils in a variety of organisations over the past 20+ years and is passionate about sharing the joy of gardening with others.

Food security is the focus of Jo’s efforts, working alongside women in Fijian villages to establish and maintain kitchen gardens to feed families as well as hosting community education programs.

Currently supporting programs in her local community, Jo volunteers as the Food Security Facilitator with the Women’s Friendship Group, which supports newly arrived Afghan Hazara families to settle in Launceston

I have been a gardener all my life having grown up on a dairy farm in Gippsland, then 10 years dairy farming in Northern Vic. However, my health was suffering and on my return to Gippsland I discovered I had food allergies which contributed to CFS/Fibromyalgia.

Nutrition supplements and Kinesiology helped me regain my health which enabled me to return to work, firstly in horticulture then with Telstra which meant moving to Geelong, the best thing that ever happened for me.

I got involved in gardening groups, started my own Gardening business, did a Permaculture Design Course, Diploma in Sustainability & Barwon Community Leadership Program.

I’ve been on the committee of The Grinter Garden Inc since it began in 2011 and run a program for students with disabilities with great results, 1 former student has an apprenticeship in horticulture.

I talk on Gardening for Good Health at Garden Clubs and local Library’s, have a  passion for growing and eating healthy food, and thrive on the networking and educational opportunities available through community gardening. Helping others to learn about and enjoy gardening has become my mission in life.

I am relatively new to the ACFCGN but I have grown up in a community environment which mimics these values.

I represent the Permaculture West committee rather than a specific garden.  In this capacity I am able to assist in varying areas and it frees me up to assist with many different gardens however required.

Obviously Permaculture is my main focus and I try to use it as a guideline with all I do,  I believe this is a great model for living and a great way to grow communities.