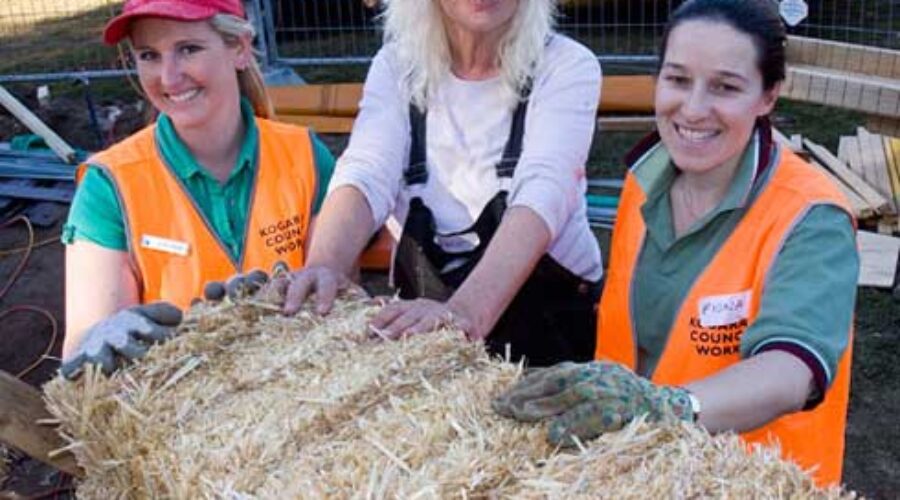 From idea to reality

Story and photos by Russ Grayson, 2009

SATURDAY was an uncharacteristically mild winter’s day in Sydney as we turned into the carpark of the Carss Park Community Centre, once a bowling club. Demographic change had led to the abandonment of the club but, just across from the carpark, a visible sign of the repurposing of what, for a generation, had been the site of the not too energetic recreation of lawn bowls was rising within the confines of a safety barrier.

It had been months since Faith Thomas and I had been here. Then, the deserted bowling green had been a flat plain of low, patchy grass. Now, an enthusiastic bunch of people were erecting a strawbale classroom to go with the Carrs Park Community Garden that is starting to grow on that grassy flat like some fungus emerging from the damp earth.

Faith and my mission on that project for Kogarah Municipal Council had been the multipronged one of writing council policy directions on community gardening, writing a gardener’s manual to cover the management of the garden, conducting a community consultation throughout the municipality to bring together a core group of people interested in starting the community garden, and conducting two participatory site design days. These had developed concept plans for the garden. It was those plans that Council’s landscape architect, Anthony Parker, had mashed together into a site design.

As we walked over to the garden to meet Council’s waste manager, Fiona Stock, the woman who has driven the community garden project and made it happen, noticeable were the works that have made the old bowling club building, now the community centre, more accessible. Inside the room used by the community garden crew I could see the Huff’N’Puff strawbale building people taking the gardeners and others through the four day course in strawbale construction.

Outside, on what had been that flat plain of low grass, the base of the outdoor classroom had been completed only the day before. Construction-wise, it consists of a base of old vehicle tyres infilled with soil and capped with a cement deck. A timber framework has started to rise from it and this is now being infilled with strawbales held firmly between steel rods. That previous day had seen the strawbale crew experimenting with different types of render to apply to the strawbales, one of which has been selected and which will be coloured to match the community centre building.

It would have been easy to have the construction crew from Living Spaces do all of the work themselves, but Fiona and her co-worker, Jenny Howie, have made the right decision that this should be a participatory construction under the supervision of the Huff’N’Puff crew.

And those concept plans developed on the final day of the participatory design process? The first manifestation of them are the two parallel, curving garden beds that already support the growth of edible winter greens. Here, the gardeners have taken an idea from the Randwick Community Organic Garden which used roofing tile seconds placed upright into the soil to make a low maintenance but very durable garden edging. Paths of bark chip have been laid around the beds. A compost-rich soil topped with a mulch layer of light yellow straw reveals that these are new gardens. So too does the line of young citrus along the eastern perimeter of the one-time bowling green.

More is to come. After the garden is officially opened, the area in the middle of the green will be progressively built over with community garden allotments, the two existing beds being for shared gardening. In the corner, a small area has been reserved for children from Council’s childcare centre that occupies the basement of the community centre building. Provision for disabled gardeners and visitors is to be installed as well.

I watched that warm Saturday afternoon as the gardeners, and those who had come especially for the strawbale building course, hefted bales and did all those things that go into making a strawbale building. Pleasing to see were faces familiar from our community consultation and participatory site design days.

It’s long been my philosophy that things usually take longer than planned to get done. But this garden and the associated outdoor classroom are an exception. Thanks for that go, first of all, to the community garden crew, then to the Huff’N’Puff folk who advise and help people unfamiliar with building to erect something of lasting community value. Thanks also go to Anthony Parker, Council’s landscape architect, to Fiona Stock and to Jenny Howie, all of whom participated in the site design activity and all of whom have maintained their enthusiasm through the trials and tribulations that are a part of any innovative project.

It was surprising to find that so much work had been done. The Carrs Park Community Garden, with its multiple user groups and outdoor classroom, truly shows the value of collaboration in going out and making things.