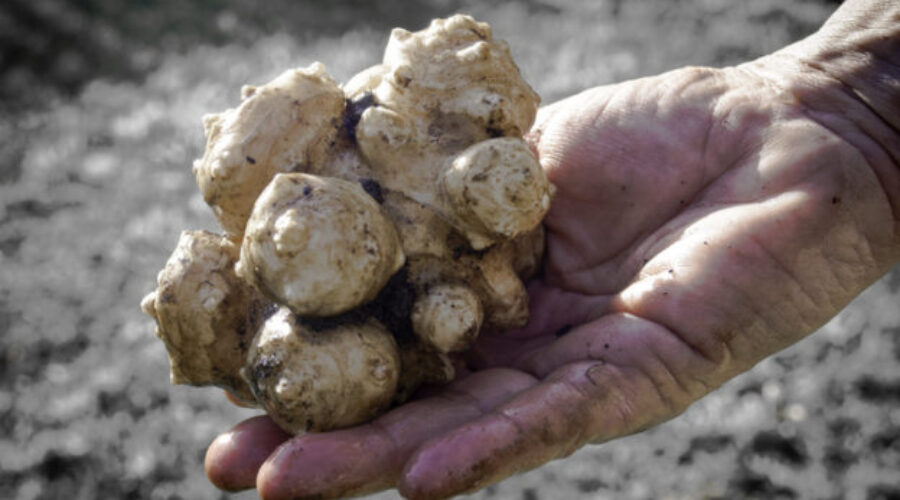 Photo and story by Russ Grayson

Botanic name: Helianthus tuberosusPlant family: Asteraceae
(so named because flowers radiate from a central point to make a star-like shape. ‘Aster’ is Latin for ‘star’).

Centre of diversity: North America.
Uses: Food.
Growth form: Long-stemmed annual to around 1.5m with foliage coming off a central stem.
A temperate region crop, the plant is a member of the sunflower family and in autumn produces bright yellow flowers that are smaller than those of the sunflower although otherwise similar in form.
Ready for harvest in the cool season, Jerusalum artichoke is harvested when the leaves brown and fall and when the stem dries and browns.

Reproduction: From tuber or part of tuber. Tubers will regenerate if left in ground.

Rotational cropping into fertile garden bedsl will maintain the quality of the tubers which, if left to regrow in the a single location, will degrade over successive crops.

Edible part: The tuber, which is cooked.

Tubers are variable in size, commonly around 7-10cm long and 3–5cm thick and commonly off-white or light brown.

Tubers are best left in soil storage until required for cooking. They will last some time before sprouting to start the next generation of plants.

Uses in community food garden design: Root crops provide much nutrition and planting a number of species including Jerusalum artichoke can increase a family’s food security through the year.

Notes: Native Americans cultivated the plant for food before the arrival of Europeans. European settlers sent tubers back to Europe where they were commercially cultivated.

The Jerusalem artichoke has no relationship with the city of Jerusalem, the name being perhaps a corruption for the Italian name for sunflower. Nor is it an artichoke, the name believed to be attributable to a European explorer noting a similarity in taste to artichoke.
Wikipedia entry