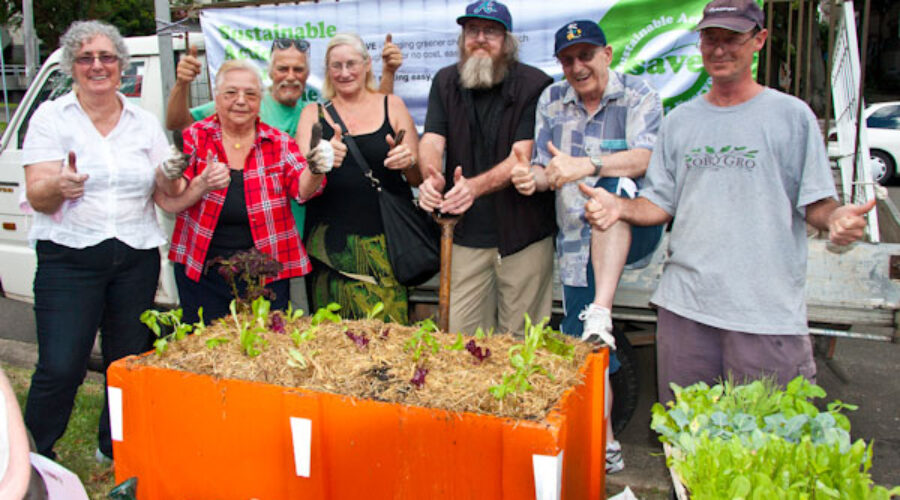 IT COMBINED ELEMENTS of learning and doing, social benefit and placemaking. And it would go on the footpath in Waterloo.
Put to me in such convincing terms by Sophie from the City of Sydney’s SAVE program (Sustainable Action and Values for Everyone—quite a mouthful and an acronym-driven name if ever I heard one), how could I refuse.

This was my final project working for the City of Sydney and it was good to see it come to fruition on a convivial Saturday morning in early Autumn.
First off, Sophie and I made the short journey out to Waterloo in a City Prius so that we could measure the footpath to see if it would be wide enough for the Salvation Army Waterloo Community Centre to build their footpath garden on. Plenty of room, it turned out, for the four proposed planters.

I asked Sophie to make sure the builders consulted Dial-Before-You-Dig to check whether there were water or gas pipes, electricity or other cables below the footpath. Had there been and had the gardeners built a footpath garden directly on the ground itself, it would have had to be rebuilt had the utility needed to dig up the underground service for maintenance. That was the thinking behind the model of raised garden planter the City was proposing in its draft policy—something with a base that could be moved out of the way and later returned, was access to underground services needed.

Next, I thought, why not try to prototype the type of planter the City was proposing in its draft Footpath Gardening Policy and locate it on the footpath to demonstrate the preferred offsets from the kerb?
The project got underway with TAFE Outreach teaching the participants, clients of the community centre, how to construct the raised planters made of marine ply reinforced with wood salvaged from freight pallets and with drainage holes in their base.

A few weeks passed and the planters were complete. I made an inspection to check them and found them strong and—in their bright orange paint—colourful… just the thing to brighten up a dull streetscape across the road from the Waterloo Estate, a large social housing conglomeration of 1960s tower blocks that, in the open space around them, features three well-used community gardens.

Meanwhile Sophie and her colleague, Megan—who was with the City’s Sustainability crew—has arranged two workshops during which the planters would be installed, filled with growing medium, planted and mulched, two per session. That process would be led by none other than ex-SBS and now ABC Gardening Australia host, Costa Georgiadis.

The workshops quickly filled.
Megan and I did our short talks, then Costa started with one of his food-focused dialogues, demonstrating how to make a wicking planter from a two litre plastic drink bottle by cutting it in half and rearranging the pieces, and discussing the value of non-hybrid seeds and other things. Then it was out to the footpath for the day’s garden construction.

Watching Costa describe how to fill the container gardens, as willing workshop attendees did the work, was like watching a garden chef make a vegetable lasagne.

A scatter of rocks was place in the base to aid drainage (drainage holes had already been drilled through the base), covered with a thick layer of sugar cane mulch, then cow manure spread over it. Next, in went a layer of lucerne, a leguminous straw that embodies in its fibre the nitrogen that plants need to grow. Following that, a powdering or rock dust to supply needed minerals to the growing plants then a layer of chook manure followed by a layer of cow manure followed by another layer of lucerne mulch, rock dust and yet more chook manure and, finally, a layer of lucerne mulch. Quite a lasagne garden indeed, and one full of varied animal droppings—not the sort of lasagne that you might be tempted to eat for dinner.

The layers were watered as they were placed in the container garden then seedlings planted through the mulch layer after Costa demonstrated the technique.

That done, the gardens were finished. It was quite clear that participants had enjoyed themselves as they stood back to admire their good work.

The planters are 1.2m in length, 0.6m wide and high. There is a base in the planters positioned 0.43m down. The purpose of this is so that they can be moved out of the way if council or some other entity imagines that it needs to dig up the footpath. With no services located below the grassy verge here, this wasn’t strictly needed as it would be were there pipes or wires below the footpath.

The planters could have been made a little longer—the draft policy stipulates that there be no longer unbroken access to the street than three metres, though that would be too long for a single footpath planter. Their height lifted them well about that which could be a trip risk, as are many of the low roadside gardens that civic-minded people construct for themselves, many built around tree bases much to the annoyance of council tree managers who think that microorganisms could transmigrate from garden soil into tree trunk and weaker their trees.

The idea in the draft policy of creating a colour contrast with the surrounding footpath area so that passers-by can avoid colliding with the planters was more than adequately taken care of by their bright orange paint and the reflectors stuck on the planters.

An offset from the kerb to the outer edge of the planter of 0.6m was maintained as per the draft policy to allow access to and from vehicles, especially important for our ageing population and for those with mobility aids. The planters were located 1.5m from transmission wire poles to allow access for their servicing and replacement. The same consideration is made for street furniture such as seats. Plenty of space was left between the garden planters and the nearby bus stop, which is used by a small community transport bus. When we measured the footpath before the project started we realised that the required minimum 1.5m footpath width, to allow unimpeded pedestrian passage, would be more than adequately accommodated.

When the adjacent seating area with its native plants is completed, along with a tiny community gardening area for community centre clients, a rather uninteresting and unremarkable strip of street will have been converted into a biodiverse and very interesting learning and local food source, just the sort of thing we need to spice up inner urban streetscapes in a way that offers food, environmental, social and learning opportunities.

With all of those benefits, a better example of tactical urbanism would be hard to find.