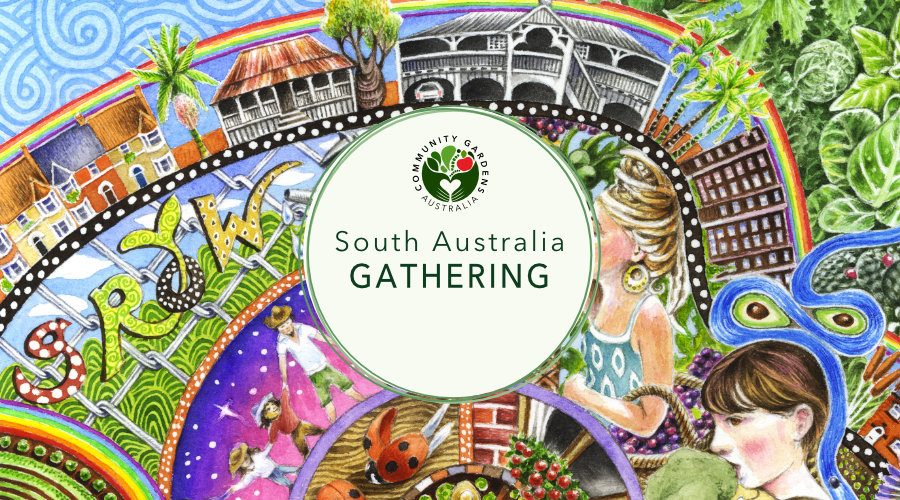 The SA Community and School Gardening Network held its twice-yearly Gathering on 21st November. People from established emerging garden projects around Adelaide shared news and stories from their gardens – here is a brief summary…
…cheers claire

Ollie reported that the garden is running well, they are working with mental health groups and are planning a permablitz for Dec 12th.

Anna reported that numerous workshops have been held recently, funded by grants.  Pizza oven has been completed and interpretative signage is in progress.  Open garden on Dec 4th.

Nicole reported that due to continuing difficulties with Henley High School the gardeners are looking for another site for their garden that is not on DECS land.  An area adjacent to Henley Oval is a possibility. Have an energetic group of gardeners.

Caro reported that a new garden is being established, it will be a school garden to begin with, with the aim to become a community garden in the future.

Alan reported that he has been delivering workshops at both gardens using funding from Conservation Council grants.  Community Benefit funding has been used to install a new propagating facility in one of them.

Alan reported that it has been 2 years since the initial idea, and much progress has been made including overcoming objections from neighbours and local councillors.  There is a keen and active group of gardeners still waiting on a change of regulations in order to use the land.

Kate reported the installation of a pergola and pizza oven. All plots subscribed and is now a waiting list.

Tim reported that after a 2 year battle led by a group of committed locals, a Community Garden will be established on an area of land previously used as a Bowling Club on Linde Reserve.  Will have access to the site from end of November.

Jeremy reported that gardeners have a new sign and a blog. Negotiations regarding expanding the garden are taking place.   The other Business City of Charles Sturt has engaged Jacqui Hunter to write a discussion paper about community garden best practices, as a background for the council developing its own Community Garden Policy.  Jacqui has begun interviewing people in regard to this.  Jacqui Hunter is looking for someone to take over her Bokashi making business.

Friends of the Earth are selling tickets to the premiere screening of the documentary ‘Design For Life, Permaculture: The Food Forest Story’. Tuesday 7 December 2010  5.30pm for a 6.00pm screening, Mercury Cinema, 13 Morphett Street, Adelaide.

Community Garden Project officer at Adelaide Botanic Gardens. Jo Staniforth was unable to attend the gathering due to illness. In her absence, claire nettle explained the project officer’s role.

A big thank you to our hosts at Walyo Yerta Community Garden.

Thanks to Kate Hubmayer and Joel Catchlove for taking notes.