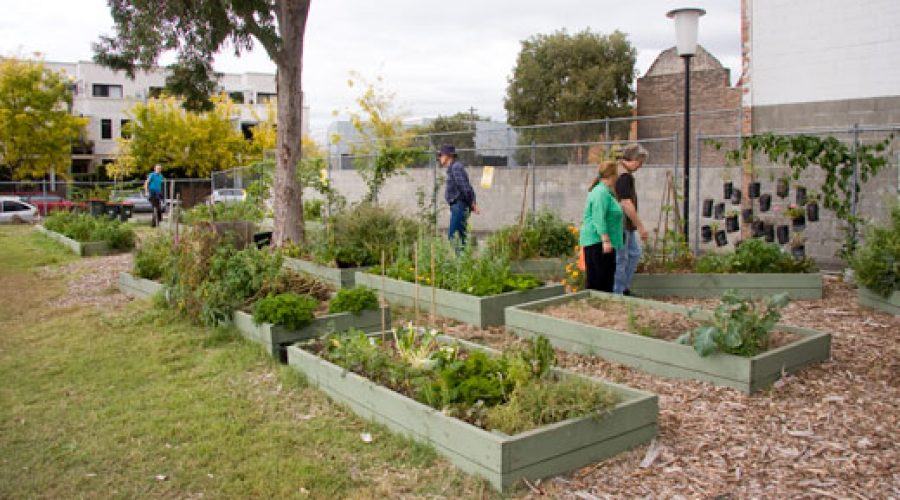 IT COMES AS SOMETHING OF A SURPRISE, this tiny community garden tucked away among the Victorian terrace houses and compact workers’ cottages in backstreet Newtown.

The garden occupies a patch of rare open space in front of the City of Sydney’s aged daycare centre. It’s been here for some years now, starting as the yellow patch of a mulched garden bed that spread over the green of the lawn, bringing the multiple hues of an edible garden to the asphalt and concrete greyness of this old and narrow side street.

Newtown Community Garden is one of Sydney’s smaller gardens, but that’s only to judge it by its physical size. What’s big about the garden is the love and enthusiasm that its gardeners put into it. And not only its gardeners find it an attractive, edible oasis in this built-up part of town. Some years ago the City of Sydney took the initiative to renovate the site. Today, those walking past look over the low fence to see an aesthetically pleasing community garden, a geometrically arrangement of raised, timber garden beds with a pond tucked away below the canopy of the trees bordering the site. As for the garden beds, the crushed gravel paths are durable and low maintenance, an important consideration in any community garden.

On this, the second City of Sydney tour of community gardens for people interested in starting their own garden and for those already involved to see how other gardeners go about it, Newtown Community Garden was inspiring. The tourers filed off the City’s minibus to enter through the gate past a clump of bananas to be greeted by Ian Fearie, the garden’s spokesman.

Ian, always a convivial host on these tours, filled the visitors in on the history and management of the garden, explaining that this was an informally-run place managed by consensus. The garden is unincorporated and carries none of the public liability insurance that has now become standard for community gardens. Gardeners are expected to take responsibility for themselves, perhaps something of a novel idea in out litigious society. With the City’s new policy on community gardens enacted a few months ago, uninsured community gardens are likely to become a thing of the past.

It’s common for visitors thinking of starting a community garden to ask about vandalism and how that’s handled. Ian responds that they tolerate what is a small amount of crop theft and hope it goes to people who really need it. The level of loss is not significant and is tolerated by the gardeners as the cost of growing food in Newtown. It comes down to adopting a philosophical and generous attitude.

Newtown has the usual accoutrements of community gardens — compost production – in plastic compost bins in Newtown’s case; mulched garden beds; a water tank harvesting rainfall from the roof of the centre to irrigate the garden – one of those large, flatish plastic tanks; and shelter for the gardeners. Shelter, once a convenience to escape the hot sun of summer and the rain, would likely now be considered a health and safety fitting to avoid sunburn and to offer protection.

Like many inner urban community gardens, Newtown’s is a mix of age ranges — from 20s to the 70s — and includes people of a variety of ethnic backgrounds. Wednesday is the common meeting day in the garden although gardeners might come at any time. Ian invites the visitors to their next meeting which, like others, features a guest speaker. As usual, the Newtown gardeners offer tea and biscuits to their visitors, the provision of food being a sure way to make people feel welcome.

Alexandria Park is a community garden in two parts. One part wraps around the front yard of the school. The other occupies part of the end of the school’s football field. In this, it is similar to the North Wollongong Community Garden.

The garden around the school building consists of long, slightly raised beds amid woodchip paths. No mandala gardens here… the beds are narrow enough to access plants from both sides and demonstrate the effectiveness of simple, easy to maintain rectangular design. As is usual in community gardens, they are occupied by a diversity of vegetables and culinary herbs.

Those on the football field are raised a little higher and some are given over to gardeners as allotments. Being in a public place, the term ‘community’ garden has been taken a little too literally on occasion, with non-gardeners helping themselves. This has stimulated the gardeners to place signs on the fence suggesting that pickers might like to become gardeners.

Alexandria demonstrates how community gardening has become an accepted practice in old industrial suburbs that once housed working class people. It also shows how community and educational institutions can come together to provide a workable solution to public need.

Woolloomooloo’s first coffee crop has been the work of community gardeners and there’s an encouraging little story attached to it.

It started when the community gardens single Coffee robusta tree came into fruit. Not knowing a great deal about coffee apart from how to drink it, the gardeners approached a local coffee roaster who roasted the red berries and handed back a bag containing Wooloomooloo’s first crop of the country’s favourite beverage.

Situated in Sydney Place amid closely-packed housing, Wooloomooloo Community Garden is another that is informally managed. Just up the road a mere few metres, squeezed between the old terrace houses,  there’s an old, steep and long flight of stone stairs that takes walkers all the way up to tree lined Victoria Avenue in Potts Point. Just down the road is Wooloomooloo Bay and its wharves, now repurposed as accommodation and restaurants.

Another garden of shared and allotment growing spaces, Woolloomooloo Community Garden moved onto this site earlier in the new century. Before that, it started as a very small patch below the Eastern Suburbs railway viaduct not far from where trains roar into the tunnel that leads to Kings Cross station and others east of it.

Here, in the present day garden, visitors find raised garden beds of durable concrete block and well made paths. Some beds have been made higher than others to make gardening easier for the less mobile. There’s a cupboard-sized tool lockup with a steel mesh door so that thieves can see what it contains — nothing of value to them; a water tank harvesting rainfall from the bamboo and galvalised iron entrance shelter; a very large wormfarm salvaged from a school that had lost interest in it; a couple compost bays and a multi-graft stone fruit tree producing three different types of fruit.

Inevitably, the visitors ask about vandalism, given that the garden is surrounded by only a low fence. Yes, they certainly experience it, the garden spokesman explains. The gardeners had the option of building a high chainink fence but decided against it, accepting a level of crop loss and the occasional damage to plants that has resulted.

One of their strategies is to engage local youth who use the adjacent basketball court. This seems to be working because the kids now accept the presence of the gardeners as part of the scene in the same way that the gardeners accept them. In deciding to keep a open garden, the gardeners once again demonstrate that reframing the vandalism issue so that it is seen as part of the local environment that they also share is an acceptable solution.

Wooloomooloo, something of an edible oasis in an environment that has been built over these past 160 or more years, produces a diversity of vegetables and herbs as well as a small portion of fruit. More importantly, it’s here that a sense of community is cultivated in a garden that brings the fresh air of life to a patch of the city with a checkered past.

In organising these tours, the City of Sydney is providing a service of inspiration to its community gardeners, both would-be and actual.

It’s also an idea that could easily be emulated by other councils so as their citizens can begin their adventure in community gardening and good design with a knowledge of what others have done, the problems they have solved and the sense of place they have created.