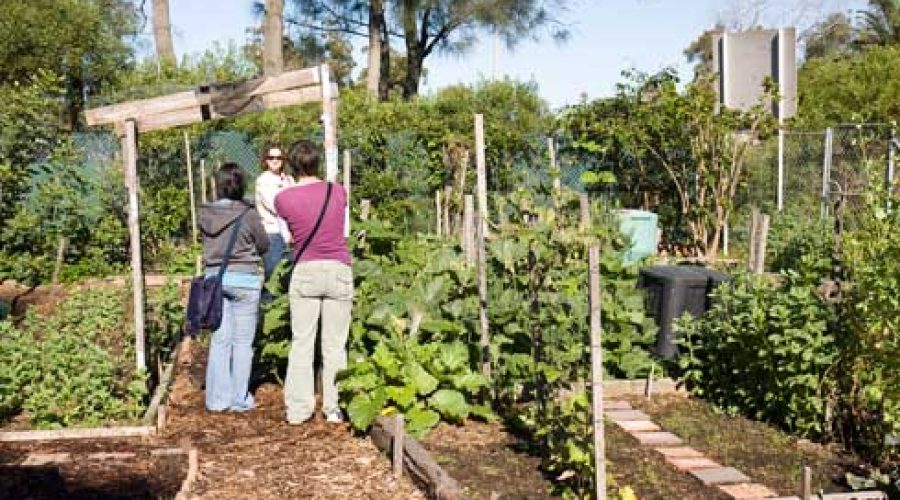 Around 70 attended for workshops, to share news of their community garden, meet colleagues and to learn from each other.

Community gardeners from the region, a consultant evaluating local government sustainability programs, some local government staffers, permaculture practitioners and the plain curious were fuelled by the tasty food produced by the Randwick community gardeners. Organised by Arts in the Garden maven, the exuberant and colourful Maery O’Connell, the event lasted until the sun sank low in the western sky.

ROCG was its sparkling, productive best for the occasion and the four Isa-Brown chickens in residence were surely amazed to encounter so many humans on the one day.

Formed into a circle, participants brought news of their gardens and other initiatives…

ROCG spokeswoman, the landscape designer, horticulturist and educator, Emma Daniel said that, now nearly three years on site, all allotments are claimed and Randwick community garden, its gardeners and chooks are flourishing.

Matt Heffernan, a home gardener and member of Permaculture Sydney South, told of how Kogarah Municipal Council is to convert a disused bowling green into a community garden.

Rob Joyner brought news of the support received from Woollahra Council and local residents for the Paddington Community Garden. He and partner Vicki said the garden should make a start by Spring this year.

There was news of the Macquarie University Community Garden which consists mainly of members from the outside community but includes a number of university staff and students.

Glovers Community Garden in the Inner West — Sydney’s oldest, started in 1986 — has adopted the biodynamic method of compost production and has constructed a total of ten allotments. The garden has previously been a shared gardening site without individual plots. The allotments have strengthened the garden and all gardeners participate in maintenance of shared garden areas. A beekeeper produces honey in the community garden and a total of 12 chooks and a rooster constitute the community garden’s livestock.

A spokesman for the proposed Clovelly Community Garden in the oceanside Eastern Suburbs explained their progress to date and said that they have communicated with the landholder of the proposed site, the NSW Water Board. Randwick City Council has assisted with meeting space and the Australian City Farms & Community Gardens Network’s Fiona Campbell and Russ Grayson ran a two-session strategic planning program for the would-be gardeners, as they did for the proposed Manly gardeners. This is a service provided by the NSW branch of the Network.

Four from the Willoughby Community Garden crew attended to explain that their present site on Willoughby Council land was temporary and that they are to start looking for a permanent site. The community gardeners operate as council volunteers.

News came from Chester Hill Community Garden in the western suburbs; the garden was started for the local community centre in the late 1990s by Sydney Pacific-Edge permaculture design course graduate, Alicia Bourner.

Gardeners agreed that garden representatives would meet more regularly to liaise and plan.