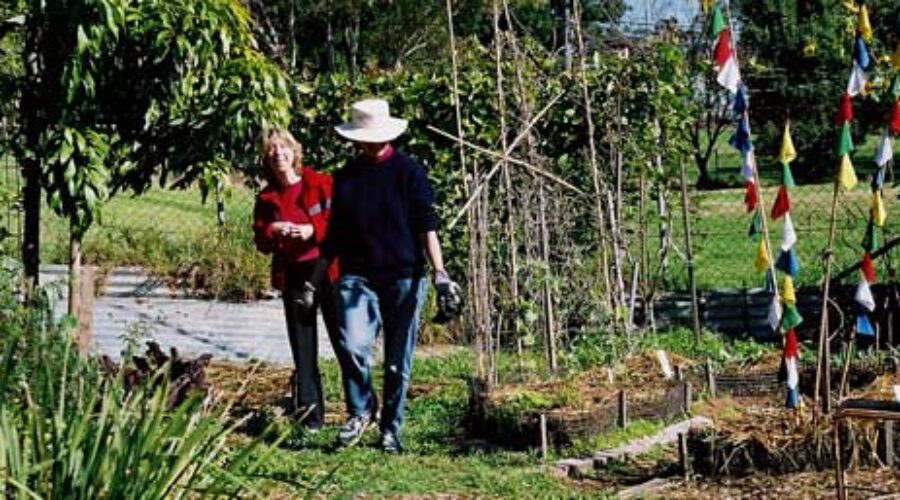 Paradise in the Inner West

JANE MOWBRAY knew something was wrong when her jacker started to melt.

“We thought we would get rid of a lot of dead wood laying around the community garden and then have a barbecue and make a salad from stuff in the garden. You could call the bonfire a ‘raging success’, I suppose… it was certainly raging as it burned into an incredibly huge and hot fire and singed some of the plants… the poor old broad beans took a bit of a battering.

“I hadn’t anticipated that it would be such a gigantic fire so I had worn my fluffy – what do they call it? – fibrepile jacket – made of material from PET bottles. It started melting when sparks got to it. But the fire eventually settled down and was incredibly warm on a freezing July night, and we did have a nice barbecue.”

The soil of the 600 square metres of north facing, sloping land was first cultivated in 1985 after the Rozelle Community Centre obtained use of the patch from the local hospital. The hospital also funded the chainlink fence surrounding the sunny hillside garden and provided water.

The hospital has gone but Glovers Community Garden persists despite fluctuating participation over the years. Standing at the top and looking over the space to the citrus along the lower fence, Glovers looks like a patch of edible shrubland. At the eastern end is a small building which serves as a storage shed. A table and assorted chairs occupy the shade below a celtus tree and nearby are compost bays, a shadecloth-covered nursery and a number of beehives.

Glovers is now undergoing a revival. “We have had quite a resurgence over the last six months or so”, says Jane. “Training for new gardeners is pretty much informal though we have been thinking about more formal teams… we’ve been inspired by the Eastern Suburbs Community Garden at Bondi Junction, which is team-oriented”. There are around 24 members at present. Jane anticipates growth.

Jane has a secret agenda

Jane is a quietly but firmly spoken, suntanned woman whose straight, dark hair falls to below her ears. She admits to a secret agenda.

“It’s no longer really secret”, she explains. “I wanted to do something for the Seed Savers Network and become a Seed Network coordinator. I discovered that was quite difficult, so, I thought, there’s that community garden down there in Rozelle and I’ll get them to save seeds with me. It took people quite a long time to know what I was talking about.

“I have grown out some seeds that Seed Savers sent me and will be sending some back to the Network over the next 18 months. We haven’t got to the point where we’re saving lots of particular seeds, we do it on a more informal basis where we save lettuce seeds, for example, and throw them back in the ground to grow lots more lettuce”.

A primary school teacher, Jane studied horticulture and permaculture design. “I came across permaculture and thought it was the most wonderful thing I had heard of”, she says, giggling a little at the recollection. I went off to Nimbin and did a permaculture course with Robyn Francis and tried to bring some of my knowledge to this garden as well as growing heaps of stuff at home.

“I teach at Canterbury Public School where we’ve got a very small vegetable garden… the kids who work in it are very keen. There’s a few keen parents who want to build an understanding of how we use electricity and water and how we recycle things. My dream is to be the gardening and cooking teacher like what Stephanie Alexander is doing with students at Collingwood College in Melbourne”.

Jane has plans for Glovers that will make it a model garden combining the entire food cycle of growing, preparing, cooking, eating and replanting the seeds produced in the garden for the next crop. “Ultimately, we want the community garden to be more of an education centre… to have a water tank and a kitchen and a composting toilet”.

“Our focus is growing organic veges and fruit as well as flowers. We want the garden to look gorgeous and attract people.”
Gardeners are always there on the first and third Saturday of the month.

“This makes the garden more accessible to new people… they know there will be people here at those times, they don’t have to sit around by themselves wondering what to do. We make decisions at meetings… we discuss things there and people vote on them.

“It’s a shared garden – there are no individual plots and this works really well. For a long time, our main problem was that produce went to waste because people wouldn’t eat enough of it. They thought they had to leave enough for others. Now we encourage people to take small amounts and share on an informal basis”.

Soil preparation is straightforward. Garden beds are prepared with compost, straw and manure. “The soil here is fantastic because people have been doing that sort of thing for the last 20 years… it’s beautiful soil to work in”, says Jane. “We do a lot of mulching and crop rotation, though that’s a little haphazard. With all the insects in the garden we don’t have much of a pest problem. We all take things home from the garden. Some people get most of their veges from here”.

“The broccoli does fabulously. I didn’t think it was possible to grow it in the inner suburbs of Sydney. I thought the caterpillars… you know… just got it instantly. A lot of brassicas grow really well here… there’s salad veges… there’s a tiny little, what looks like a red currant tomato that somebody must have planted years ago that virtually takes over the whole garden if you let it, so there’s thousands of these… there’s a fair bit of citrus, avocado… a fig tree… an olive… we’ve recently got a nice crop of water chestnut… there’s herbs… ginger or galangal – I’m not sure which – and there’s cardamom, not that we’ll actually get seeds, unfortunately… “.

There’s something else at Glovers, something not all community gardens have – chooks.

“We weren’t sure how they would go but they are a success story. We’ve got some poor old chooks saved from a battery by Rent-a-Chook, which built the A-frame shelter for them. People are very keen to look after them. If somebody has to go away it’s no problem because there’s someone to fill in on their roster.

“We lock them in at night because of foxes and cats and other things… and I think that’s why they’re still with us… so somebody comes in the morning to let them out. They don’t free range in the garden, they would eat everything. We have plans to have a couple more chook runs to rotate them around to avoid build-up of parasites in the soil and that sort of thing”.

“It’s hard to find places that sell chook food these days. I mix up my own wheat, sorghum, cracked corn, sunflower seed – they love sunflower seed – and we give them garden scraps, kitchen scraps. People bring down a lot of things for them, little treats… I give them little bits of meat with garlic in it to control worms and things like that”.

Bees are the gardener’s other livestock. “Rosemary extracts the honey and leaves bottles for us as well as the honeycomb, which is delicious. We pay her a small amount to cover costs. The gardeners scoff it immediately – we don’t have a surplus to sell”.

Success in a community garden is difficult to measure but one thing is certain – it is the people who make Glovers Community Garden a success.
“Oh… hmm… this garden has been successful in different ways”, responds Jane. “Until recently, 10 to 12 people were using it on a regular basis and were feeding themselves to a significant degree. Now, there’s lots more social interaction instead of just individual activity.

The Glover’s gardeners have made the same discovery as have other community gardens… that the sharing of food, as much of it as possible from the garden, binds a group and creates an ambiance of conviviality. “We have shared meals on occasions and we have had a few talks on chickens, seed saving and so on. When we have meetings we usually have barbecues to encouraging people to come and to make them feel welcome”, says Jane.

“There’s a couple men who bring their two and three year-olds here to learn about seeds and plants and chickens and growing things and getting germs which they don’t get much access to otherwise. The gardeners are mainly people in full-time work though a few have more flexible hours. Most of us spend time here on the weekend”.

“I would like to see the garden expand and more members, more older people get involved. I would like kid’s groups to come down to do art and gardening and maybe some meetings in the garden where people can play music and sing and run all sorts of workshops.”

“A lot of people go past the garden while walking their dogs and we’re always very encouraging… saying it’s a community garden that is open to everybody… please join”.