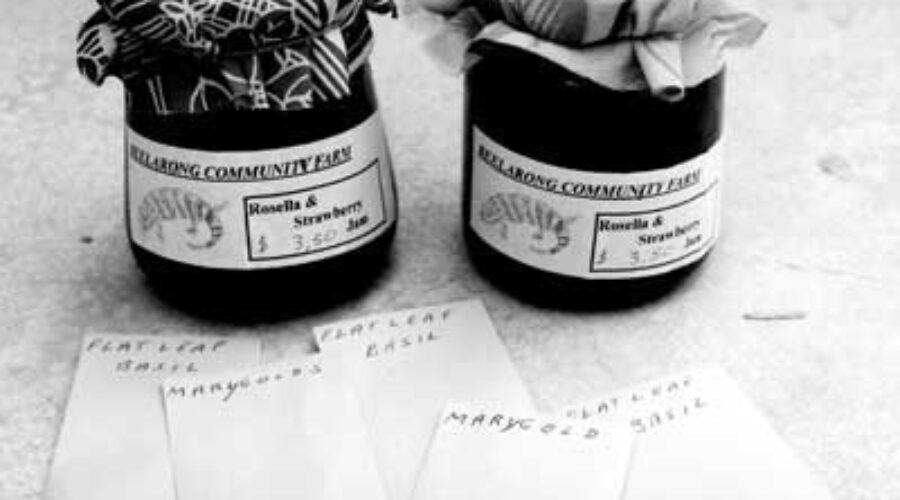 FOR JOANNE SEEBERG, the community farm has been both challenge and triumph.

Mention challenges and Joanne looks skyward as if seeking inspiration.

“It’s finding money to run it”, she says.

“To make money we’ve gone into selling $5 ‘green bags’ of fresh garden vegetables. That has gone really well but we need to get more produce in the ground. The farm also sells rosella (the bud of an edible hibiscus) and other jams made from garden produce”.

And the day to day challenges? “People, community… different people with different ideas… and problem solving. We have a weekly meeting for anything that needs to be worked out and everybody has a chance to make their point.”

For a garden with challenges, Beelarong Community Farm is a productive but expansive place. The garden is tucked away at the end of a suburban street in suburban Morningside, Brisbane, and the first things the visitor notices are the renewable technologies. A composting toilet, photovoltaic array to produce solar electricity, solar-electric street lights, a large greywater treatment system and big rainwater storage tanks catch your attention as much as the allotment gardens brimming with vegetables.

“We get no vandalism here. People say… what? No graffiti?” says Joanne. “It’s because everyone around here knows the farm. The local kids come through from the high school… you say hello to them… you get them involved and then they feel part of it too. When they see other people wrecking it they’re going to stop them. It’s about getting everyone involved.”

This is good news because, unlike many community gardens, Beelarong is not fenced off.

Relationship building does not involve just the local children. When the gardeners were starting out, they had to carefully cultivate those with political power.

Offering advice to others planning a city farm or community garden, Joanne says: “Build a relationship by introducing yourself to local council members.

“Because community gardening is so new, a lot of councils do not understand what people want… they think it’s hippyville or something. They have never heard of it. But, if you have pictures of other gardens and you go in there with a sound plan, then they will listen, I think.

“Connect with council straight away because that — council — is where it all stems from. Have a piece of land in mind, and costs. You need key people too.”

“Know what other people are doing so that you are united and so that everyone has the same plan in mind.

“Keep trying. It will happen. Get into your local schools and council and the local people around you.”

Joanne joined the garden after it started.

“I was in a local garden club and I stared coming down here with them. Once I saw the place it was… wow!… this is what I want. So I stopped volunteering with the garden club and started coming down here two days a week. I met Marion and started doing the council’s GOLD (Growing Old and Living Dangerously) programs for people over 55, and school tours.

The shelter building also houses meeting/socialising space, water tanks and the batteries for the solar electric system. The wall around the shelter is a greywater system fed by the sink at one end where tools are washed. The cascade and pond in the foreground are part of the greywater/irrigation system.

A garden of many parts

“There’s Gateway. They look after refugees and single mothers. They do a vegie run and they’ve got their own veggie patch as well. There’s also people in wheel chairs and carers and their clients. There’s a Friday playgroup… they’ve made a really nice snake garden and a scarecrow.
“We’ve got a New Farm Group who feed the homeless twice a week. They bring groups to the farm to give them a day out. They love coming to the farm, they bring their barbecue.

“There’s school tours too. We had years four and five come down from Cannon Hill school. We took them on a tour and let them smell and taste things and see how things grow. We got ‘Oh, wow, is that how they grow? I thought they came out of a bag’. I’ve got a school tour coming up on how to feed the world’s hungry. We’re going to show them how to build a no-dig garden and seed saving… we’re a Seed Savers Network local seed saving group with a seed bank. We sell non-hybrid seeds.”

Introducing all these divergent groups to the community farm has been one of the triumphs, according to Joanne. “It has been opening the farm up to communities and letting them feel as though it’s their farm as well. A lot of people still don’t know it’s here.”

“We find funds through grants, “, Joanne explained. “We are an incorporated association. You need this right from the start.”

Excess produce is bottled to raise funds for the community farm. Non-hybrid seeds are dried and bagged for distribution.